When you start shopping for high-quality smoking guns, things start to get pretty confusing. The Smoking Gun Pro by PolyScience (distributed by Breville) is the original device that inspired so many others. But Breville also makes another, similar device, which they also called the Smoking Gun.

If you’re looking into buying either, read our comparison guide to help you figure out which one is better for you.

But if you’re looking for the quick and easy answer:

We recommend the PolyScience/Breville Smoking Gun Pro if you’re a professional chef or a seriously advanced home cook operating at a professional level.

If you’re “just” a highly creative home cook who wants to add versatile smoky flavor to various dishes, and you don’t need an ultra-precise professional-level tool, save some money and get the Breville Smoking Gun instead. It’s a high-quality tool that’s more than sufficient for most home uses. 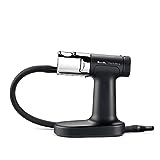 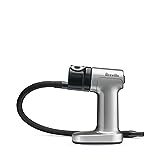 If you’re curious about each of these products in depth, we’ve written full reviews of each. Take a look at those to learn even more about some details not included in this comparison!

We started by opening the Breville Smoking Gun. It was beautifully packaged, with obvious thought and care having gone into the presentation. We were especially delighted to see beautiful, full-color recipe cards inside. (We’re always pointing out that more companies should include these, as they’re a simple way to dramatically step up that first impression.)

The PolyScience/Breville Smoking Gun Pro was also nicely packaged, but lacked some of the beautiful flashiness. It immediately came across as a more professional, industrial tool. It was notably lacking in anything that went out of its way to make it accessible for the home cook.

Both feel hefty and high-quality when you take them out of the package. It’s obvious that these are both well-made tools, not cheap junk. (As if you hadn’t noticed from the price!) But the PolyScience version is notably more solid. The Breville Smoking Gun weighs 16.6 oz, while the PolyScience option is almost double the weight at 31.9 oz.

The Breville Smoking Gun does a fantastic job of immediately and clearly defining its audience: the passionate and creative home cook. Everything about its presentation and function immediately speaks to this audience.

For example, the included recipe cards ensure that the home cook who has never before used a smoking gun has some immediate inspiration. But the recipes aren’t designed for struggling new cooks; they’re clearly intended for people who are passionate about food and cooking.

The packaging, too, is immediately enticing. The box shows the smoking gun in use on a dish of delicious-looking food, suggesting the mouthwatering possibilities that the tool offers. And while it’s ideal for the complex flavor combinations that you can create by smoking different woods, it’s also simple and straightforward to operate, with just two speed settings.

In short, the Breville Smoking Gun would be a fantastic gift to any passionate and fairly advanced home cook. (And if no one else gets you one, make it a gift to yourself!)

In contrast, the PolyScience/Breville Smoking Gun Pro definitely comes across as a more professional tool, and appears to be created with the professional chef in mind.

The packaging, for example, gives the impression of a professional tool rather than a fun new gadget. And this one doesn’t come with recipe cards, presumably because a high-end chef ordering this tool for their restaurant already has their own dishes in mind to create.

Finally, the extra versatility in smoke levels offered by the PolyScience/Breville Smoking Gun Pro makes it well suited for a professional environment where every detail needs to be perfect every single time. If you’re cooking at home for your family, you can experiment and get close enough. If you’re making perfectly precise dishes in a high-end restaurant, you need ultimate control.

(As a final detail, you can quickly gauge the intended audiences for these two tools by their cleaning instructions. The Breville Smoking Gun is all about quick and easy cleaning, as you might do at home, and users are told not to disassemble it further. This is clearly ideal for home users. The PolyScience/Breville Smoking Gun Pro, on the other hand, gives explicit details on how to completely disassemble it and clean each individual piece, the way you would need to after intensive professional/restaurant use.)

This is the biggest difference in function between the two smoking guns.

The Breville Smoking Gun has a simple switch with three settings: low, off, and high. And honestly, this is probably all you’ll ever need if you’re a home cook.

The PolyScience/Breville Smoking Gun Pro, on the other hand, has a dial that you can turn to adjust from maximum to minimum air flow (and therefore smoke flow).

At the high end, both tools produce air/smoke at approximately the same speed.

The biggest difference comes at the low end. Even on its “low” setting, the Breville Smoking Gun still produces smoke fairly quickly (although noticeably more slowly than on the high setting). The PolyScience/Breville Smoking Gun Pro, on the other hand, is capable of making a very slow wisp of smoke.

Unfortunately we don’t have fancy lab tools capable of measuring precise airflow, so we had to make do with plastic bags. My very rough estimate from these experiments is that the PolyScience option on its lowest setting produces smoke at about 15% to 20% of the rate of the Breville on its lowest setting.

If you absolutely need to have this level of control over the airflow and want to be able to produce very little smoke at a time, consider the PolyScience option. Otherwise, the Breville should work just fine.

Both of these tools work exactly as they should. There’s honestly very little to say here, because they both produce smoke as intended.

The only real difference is the adjustable airflow/smoke flow speed on the PolyScience option, which we’ve already covered in depth in the previous section.

Other than that, all we can really say is that both work consistently and reliably based on all of our testing and experiments so far.

Ease of Use Comparison

Both smoking guns are very easy to use, and I wouldn’t say this should be a factor in your decision.

The PolyScience has a slightly wider and shallower burn chamber, which arguably makes it easier to light—but it’s already so easy to light the Breville that this isn’t really a consideration.

Similarly, the Breville is arguably slightly simpler to operate since it just has two speed settings. But the dial on the PolyScience is straightforward enough that this shouldn’t really be a consideration either in terms of ease of use (see the section about control over smoke level for more discussion of that factor).

One of the only notable differences between the two in terms of how it feels to use them is that the PolyScience option is much sturdier and less prone to tipping over. Since it’s almost double the weight of the Breville, and has a larger base, it’s much harder to accidentally tip over.

If you tend to be clumsy in the kitchen, this extra stability might make all the difference. After all, you don’t want burning wood chips to fall over and potentially set something else alight.

Despite being similar overall in style, these two smoking guns have some visual differences that set them apart.

The Breville Smoking Gun has a silver-colored plastic base and pillar, with a black metal barrel that holds the burn chamber.

The Breville/PolyScience Smoking Gun Pro has a black plastic base and pillar, with a stainless steel barrel holding the burn chamber.

You’ll also immediately notice that the PolyScience version is longer, with an extended base to match. The Breville is very slightly shorter, although they’re similar in height.

It’s always hard to state definitive prices when things go on sale so often. When neither is on sale, though, the PolyScience version is definitely more expensive.

We tend to see the Breville go on sale more often too, which can make it an even better deal in comparison. With that said, if you find the PolyScience on sale, by all means go for it!

You can check now to see if either is on sale on Amazon by clicking the following links:

They’re very similar in terms of function, with two main differences. First, the PolyScience version has a dial to adjust airflow and smoke speed, whereas the Breville has just two settings (high and low). Both produce smoke at about the same rate on the high end, but the PolyScience is capable of producing it much more slowly on the low end. Second, the PolyScience is almost double the weight of the Breville, which makes it sturdier and less prone to being knocked over.

Overall, we recommend each of these two smoking guns for the audience it was designed for: the Breville Smoking Gun for the passionate home cook, and the PolyScience/Breville Smoking Gun Pro for the professional chef. But you really can’t go wrong with either, so it’s just a matter of preference based on their differences (and, of course, the price). 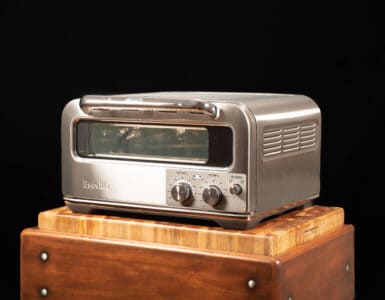 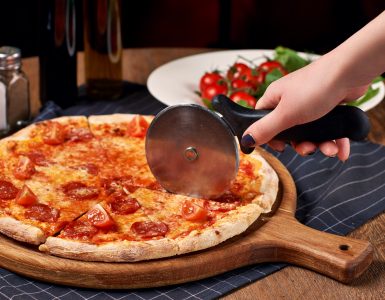 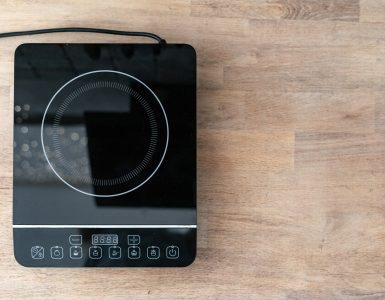