Sous Vide vs. Pressure Cooker: Everything You Need to Know

After all, both techniques involve cooking food in liquid, so they must be pretty similar, right?

Despite the similarity of cooking with liquid (and the fact that some sous vide cookers look like some pressure cookers), pressure cooking and sous vide are inherently completely different.

The Basics of Sous Vide vs. Pressure Cooker Methods

As mentioned above, these two culinary techniques are distinctly different. Let’s dig into these differences so you can decide which one to use for dinner tonight (or which corresponding device you should invest in!).

Pressure cooking uses pressure to raise the temperature at which water boils. In short, this means that it uses extra-hot steam to cook foods at temperatures that wouldn’t be possible with a typical pot on the stove. This cooking method requires a specialized pot with a lid that locks on very securely and has a vent for steam.

Once you put your food and liquid into the pressure cooker, lock on the lid, and start heating it up, pressure builds up inside. And thanks to that pressure leading to ultra-hot steam, pressure cooking is much faster than a simple stovetop equivalent. This lets you get dinner on the table quickly and easily.

Sous vide cooking focuses on precision. Your sous vide device will raise the temperature of a water bath to the precise temperature you choose, then hold it there. You put your food into a plastic bag, remove the air, and put the bag into the water. Gradually, the water brings the food up to that exact temperature you chose previously.

This means that it’s essentially impossible to overcook your food, unless you set the temperature too high or left your food in the water bath for too long (which is typically a matter of hours).

As you might expect, this means that sous vide cooking typically takes quite a while. A sous vide steak will typically take 1 to 4 hours, compared to just a few minutes on each side if you fry it in a pan. But the result will be mouthwateringly perfect medium-rare every single time.

A sous vide device is designed to cook food very precisely low and slow. Whether you use an immersion circulator or a standalone sous vide cooker, the idea is the same: you heat a water bath to exactly the temperature you want your food to be. You then put your food in a bag (traditionally, but not necessarily, vacuum-sealed). The bag goes into the water bath and stays there until the food has reached the same temperature as the water. Usually, this is measured in hours rather than minutes.

Basically, if you want to make a perfectly controlled gourmet meal, sous vide cooking gives you the sort of precision you’ll need. But if you want to quickly get dinner on the table, a pressure cooker is your best friend.

Can You Sous Vide in a Pressure Cooker?

No (with some exceptions).

You cannot sous vide in a standard pressure cooker—unless it’s one where you can just stick your immersion circulator into the pot and use it as if it were any other container. But the pressure cooking function does not work for sous vide.

This is because a pressure cooker is designed to get extra-hot to cook quickly, and sous vide cooking relies on precision, relatively low temperatures, and long cook times. The two cooking methods are at odds with each other, using different strategies to achieve different culinary goals.

However, some modern pressure cookers have a built-in sous vide setting. This does not apply to the old-fashioned stovetop pressure cookers, but only the contemporary electric ones.

The Instant Pot Duo Evo Plus is a great example of this; zoom in on the picture of the controls on Amazon and you’ll see that there’s a specific “Sous Vide” button.

We’ve also written about Instant Pots vs. sous vide cooking, and you can learn more there if you’re curious!

If you’re lucky enough to have a multifunction pressure cooker like this, you can absolutely use it for sous vide! Most pressure cookers with sous vide functions won’t circulate the water, which isn’t ideal, but also isn’t generally a dealbreaker with this style of cooking.

Is a Sous Vide Cooker Worth It if I Already Have a Pressure Cooker?

If you’re satisfied with being able to throw together a quick and delicious dinner in your pressure cooker, you may not need a sous vide device at all. But if you want to be able to prepare extra-special meals, I think you’ll love being able to sous vide too.

Personally, I have both a sous vide circulator (more than one, actually…) and a pressure cooker, specifically an Instant Pot Duo.

They’re both great, but for completely different purposes.

I tend to use a sous vide circulator more often, but that’s just because cooking is my main hobby/obsession as well as a big component of my work. And even so, I’m definitely not above throwing a quick meal together in the pressure cooker when it’s been a busy day!

If you’ve decided that you’d like to get a sous vide circulator, we recommend the Anova Culinary Sous Vide Precision Cooker! This is an immersion circulator, meaning you can attach it to any large pot or appropriate sous vide container. You could also get a standalone sous vide cooker, but if you already have a pressure cooker, you probably don’t need another large device in your kitchen!

Wouldn’t it be nice if just one kitchen device could work for all cooking techniques? Unfortunately, we’re not there yet—and pressure cookers are no substitute for a sous vide immersion circulator or an all-in-one sous vide cooker.

This is because pressure cookers are specifically designed to get extremely hot using pressure, while sous vide cooking is all about an ultra-precise, relatively low temperature.

There are a handful of modern pressure cookers that also have a sous vide setting (check out the Instant Pot Duo Evo Plus as an example). If you’re lucky enough to have one of these, you can sous vide in it! Just make sure you’re using the correct setting.

If you have an old-fashioned stovetop pressure cooker, though, it absolutely won’t work for sous vide. At least, not while it’s pressurized! You may be able to attach an immersion circulator to the pot and simply use it as a sous vide container. (This means using the circulator to heat water inside, not using the pot on the stovetop for sous vide!)

With all the culinary technology out there, it can be hard to know exactly what works for what. Can you sous vide in a Crock Pot? What’s the difference between the two? Are they just different names for the same thing...

Complete Guide to Espuma: What It Is & How to Make It

Culinary foam is nothing new. If you’ve ever made whipped cream, a chocolate mousse, a lemon meringue pie, you’ve already made culinary foam (even if you didn’t think of it that way). Even bread is technically a foam! 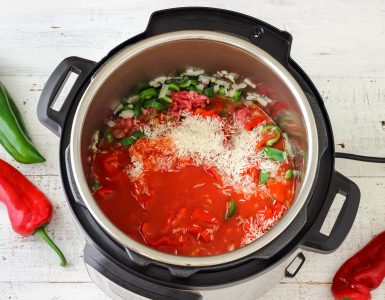 Sous Vide vs. Instant Pot: Everything You Need to Know

You’ve probably heard a lot about sous vide cooking and the Instant Pot in the last couple of years, even if you don’t have either. But they don’t actually have much in common, other than their growing popularity among...